Yours, Mine and Ours meets Nicholas Sparks in Sheryl Browne's contemporary romance about family, healing, and second chances.

Read on for an excerpt from Learning to Love, and then download the book. 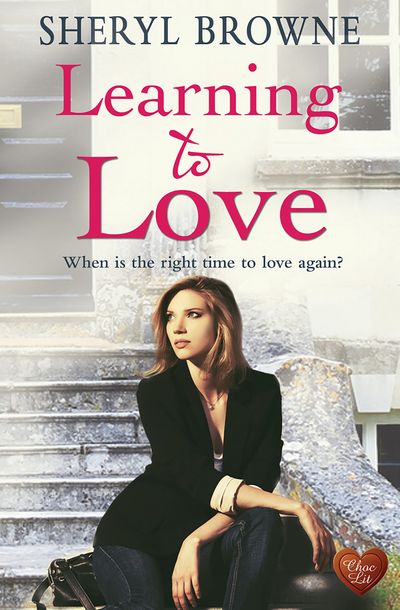 Andrea fixed her eyes down as she walked through the playground, and tried not to breathe in the acrid smell of burnt wood still permeating the air.

Shoes, she’d thought, when she’d gone online, only to wonder whether to buy trainers or boots, and this was before considering Ryan and Sophie’s critical ‘cool’ footwear factor. There were toiletries to think about, potties and panties, duvets, toys and blankets, not to mention actual clothes. Andrea was truly grateful for her neighbours’ efforts but, ‘totally wicked’ though Sophie had thought some of the donated clothes were, she doubted she’d be so thrilled at the prospect of second-hand knickers.

Where would she find the money to pay for it all until the insurers paid out? As for Jonathan and where they would be in the future … Andrea sighed heavily. In truth, she had no inclination to think about it. Jonathan’s explanations about his whereabouts after the fire had sounded plausible, but vague somehow, and Andrea just didn’t have the energy to go there. What she would quite like to do was crawl into bed and sleep, preferably to wake up and find the whole awful mess was no more than a nightmare. In the absence of a bed to call her own, however, she’d come to the school instead. Selfish though it might seem, she needed some space. Something to do, other than sort through castoffs, or curl into a ball and cry, which she’d come very close to doing.

Physical therapy might be better though, and far less destabilising to her children than a blubbering mother, she decided, discarding her coat and bending to clutch at a weed fighting for space amongst many on the patch of land Andrea wanted to transform into a garden. Determined, she concentrated her efforts on tugging the gangly plant from the ground, then puffed up her fringe and tugged harder; and then wiped her hands free of rubbery green leaves, the only things she’d succeeded in removing thus far.

Damn. ‘It’s you or me, Little Weed,’ she growled, squatting to grab hold of it with both hands. ‘And be warned I’m in no mood to give in.’ She yanked at it, ‘Oooh, come on!’, and heaved, and … ‘Eeek!’ … keeled inelegantly backwards, plopping heavily – and painfully – to her hindquarters.

'Right! Now, it’s war!’ she muttered, narrowing her eyes and attempting to scramble to her feet, only to find herself being hauled up from behind by a pair of firm hands.

‘Ouch, I bet that hurt,’ the owner of the hands imparted.

‘Not half as much as my pride,’ Andrea grumbled, turning to face David, who obviously found her predicament hilarious, judging by the merriment in his eyes. Nice eyes, she thought, her own eyes reluctant to look away, not ice cool at all. Quite warm and friendly, in fact, now he’d let his guard down.

Want more contemporary romance? Sign up for A Love So True's newsletter and get our swoon-worthy recommendations delivered straight to your inbox.

‘I was passing,’ he said, holding her gaze, which Andrea found peculiarly disconcerting. ‘Saw this mad woman muttering to herself and trying to steal the plants, so I thought I’d better investigate.’

‘I’m not trying to steal them.’ Andrea looked away first, feeling more disorientated by the close proximity of his body than her spectacularly embarrassing tumble. ‘They’re weeds,’ she explained, rubbing her assaulted rump. ‘I’m trying to kill them.’

David laughed. ‘What, with threats?’

Andrea folded her arms, which allowed her a little more breathing space between them, and cocked her head to one side, her expression she hoped conveying not amused, rather than inexplicably confused.

David did likewise, his expression highly amused. ‘Not working really, is it?’ he ventured.

Andrea’s mouth twitched into a smile. She couldn’t help it. Despite her bruised pride, bruised bottom, and her whole world falling apart, there was something about this man that made her feel … at ease with herself, somehow.

Or at least he had.

She doubted she’d have been dancing dottily around singing a duet with her mum in front of Jonathan, who would have thought her just that, dotty. David hadn’t batted an eye. He’d even joined in and managed a whole actual laugh. He really was quite attractive. Andrea found herself appraising him again, taking in his soulful blue eyes, framed by unfairly dark eyelashes, his strong jawline, a hint of dark stubble thereon, which was undeniably sexy in a rugged-man sort of way, his mouth which far better suited a smile.

His torso was firm, long-limbed and well-toned, she couldn’t help but notice as they’d passed on the landing. His hands elegant and strong, with clean fingernails; those of a doctor a patient might immediately trust. Yes, outwardly, all the qualities a woman would find extremely attractive. And inwardly? David Adams had learned the hardest possible way the immeasurable pain cheating and lying can cause a woman. He was a caring person. Andrea had seen that. A man who’d hurt someone he loved and was hurting because of it. Should he ever feel guilt-free enough to embark on another relationship, she was sure he would be sensitive to a woman’s feelings. Her needs. Andrea’s eyes strayed to his lips, soft and full enough to be sensuous on a man.

Related: Good Things Come to Those Who Wait—Or Do They?

‘Sorry?’ Andrea continued to stare at him, her gaze seeming to be drawn to his.

‘The, er, green foliage. Matches your eyes,’ he joked, but there was a flicker of uncertainty in his expression.

She watched, transfixed, as he hesitated, and then reached for what could have been a hornet’s nest in her hair, so little did she care. And when his fingers brushed her cheek, David Adams as good as electrocuted her on the spot.

Closing her eyes and panting out a surprised breath, Andrea stifled a ridiculous desire to turn her face to his touch, to feel his fingers tracing the curve of her cheek, her lips … His mouth following in their wake, covering hers, his tongue gently probing and— she was fantasising about the man – right in front of him!

‘It’s er …’ He shook his head, as if bemused, then moved his hand through her hair to retrieve whatever was there, instantaneously sending another shockwave of pleasure right through her. ‘A leaf,’ he said, holding up the evidence. ‘I thought you might panic when you pulled your sweater … Ahem. Would you like a hand?’

‘You have to dig them out,’ David said softly.

Andrea didn’t answer. Instead, she continued to study him. Searching his face. On hers, open confusion.

Want more contemporary romance? Sign up for A Love So True, and get our swoon-worthy recommendations delivered straight to your inbox.

David mentally reprimanded himself. What on earth had possessed him to let his hand linger like that? Tempted him to lean forward and steal a kiss from those velvet soft lips, so breathtakingly beautiful when she smiled, so agonisingly sensual when parted like that, in surprise.

To wonder what Andrea would feel like in his arms, kissing him back? In his bed? He’d wanted to taste her, touch her. Explore every inch of her. He swallowed hard. He wanted to make love to her. This was more than needing the solace of a woman’s touch. Needing to lose himself in the embrace of a woman. What he was feeling, David realised, with a jolt, was nothing to do with sex or lust.

He was in love with this woman.

But this woman was with another man. In love with another man – and completely out of bounds. There was simply nothing he could do about it. As much as David knew his chances of feeling this way ever again were probably nil, absolutely no way would he even test the waters. Break up another family? Traumatise Jake more than he already had? Cause chaos in Sophie and Ryan’s lives? And what about little Chloe? Eden wasn’t up to much in David’s estimation, but to his daughter he would be everything.

Then there was Andrea. He was assuming an awful lot, such as the fact she might be remotely interested. Could she be? Had he seen … something … in her eyes, or was that just his own wishful thinking? And, if she was, wouldn’t he break her bloody heart, too? That was one thing he was guaranteed to be good at.

‘I know.’ Andrea pulled his attention away from where it shouldn’t be.

David squinted at her, sure she’d been reading every wrong thought in his head.

‘By the roots,’ Andrea went on, looking perturbed now. As if she would very much have preferred he keep his hands to himself.

David nodded, forcing a smile and telling himself he was a bloody fool. Her only interest in him was that she cared, because that’s the kind of person she was.

‘Are you okay?’ he asked, thinking he’d rather apologise. But then, if Andrea had no inkling of why his hand had been reluctant to pull away, wouldn’t she wonder what he was apologising for? ‘You look a bit pale,’ he said, groping for anything to say instead.

‘Just cold,’ Andrea assured him, wrapping her arms about herself.

How David wanted to wrap his arms around her. Pull her close and keep her safe. Do it right this time. But, of course, he couldn’t.

Andrea’s gaze faltered. ‘Shall we have a bash, then?’ She smiled uncertainly and nodded towards the patch of weeds. ‘I think physical activity might be the only thing that will warm me up, to be honest.’

‘Let’s get some tools.’ David nodded firmly, whilst working very hard not to imagine the kind of physical activity that might keep them both warm.

Want to find out what happens next? Download Learning to Love by Sheryl Browne.