Good Things Come to Those Who Wait — Or Do They?

As children, we're taught to be patient. But when it comes to passion, author Hope Ramsay says it can pay to take matters into your own hands.

She had a point. But not the obvious one. Her correction was intended to teach me the virtue of patience, not the important lesson of embracing life and living every moment to the fullest.

And when I was coming of age in the 1960s, I waited by the telephone for boys to call me. It was a rule. Girls waited. Boys acted. Even during the sexual revolution.

So naturally when a boy finally called, I latched on to him, all through high school and most of college. I waited to feel that real love, even though I knew he could never give me what I wanted. But I remained ever patient.

We’ve got a crush on you. Sign up for our free newsletter and show us it’s mutual!

Until something snapped my senior year in college. The sexual revolution was almost over, and the women’s movement had just begun. Inspired, I ditched the high school boyfriend, packed up my stuff, and moved to a new city.

Where I stopped waiting by the phone.

Instead, I took myself out on dates with book boyfriends. One night, I walked into a restaurant, carrying one of James Michener’s big novels in my purse, took a quick glance around the dining room, and bam! Cupid struck.

He was there. The man of my dreams. I knew he was Mr. Right the moment I laid eyes on him.

You would think that a rational person would take matters into her own hands at a moment like that. An impatient person would have put the book boyfriend down, walked across the dining room, and introduced herself, right?

RELATED: A Smart and Sexy Entrepreneur Meets Her Match

I don’t know why. Fear? Ingrained training? Whatever. I failed to act.

Thank goodness, he came over to talk to me because I married him a year later and we’ve been together for 41 years.

But what if he hadn’t come over to talk to me?

What if I hadn’t taken myself out on a date?

Everything would be different.

So, what does this personal story have to do with my book The Bride Next Door?

Neither of these characters will get what they want until they stop waiting around for it.

Here’s a little snippet from Courtney’s point of view. Her friend, who’s also waiting in her own way, challenges her when she talks about Mr. Right.

"I should stop waiting around for Mr. Right,” Courtney said.

“Waiting around in what way?” Arwen asked.

“I don’t know. It’s just that we say that all the time, and when you parse it out, what does it mean? Why are we waiting? Is real life going to start when some guy arrives? Shouldn’t we concentrate on enjoying our lives now?” She helped herself to another pita chip smothered with crab dip and chewed with a thoughtful expression on her face.

Leave it to Arwen to get philosophical. Courtney leaned back in her chair, took another sip of her Manhattan, and cast her gaze over the usual bar regulars: Juni Petersen, the owner, dressed in a long, flowing India-print dress; bartender Rory Ahearn, chatting up the ladies and flashing them his Irish smile; and police officer Ryan Pierce, sitting at the end of the bar nursing a Coke, all of them single, all of them damaged in some way.

Damn. Half the people in the bar were waiting for something.

RELATED: This Close Is Your Next Romance Binge

And here’s Matt, thinking about the woman he’s falling in love with, who lives right across the hallway in the same apartment building:

He grabbed a beer and ordered a pizza and then fired up the fifty-inch flat-screen TV he’d bought over the weekend. He flipped through several channels and settled on the Nationals game, which was tied in the bottom of the fourth inning.

He collapsed on his couch. Waiting.

Courtney wasn’t going to bridge that gap between his apartment and hers, was she? If Matt wanted her, he’d have to go after her.

We’ve got a crush on you. Sign up for our free newsletter and show us it’s mutual!

Luckily my hero and heroine soon learn that to find true love, they have to cross the great divide otherwise known as the hallway that separates his apartment from hers.

Nothing ever really comes to those who wait, no matter what your grumpy Aunt Annie might have told you as a child. I am super glad I finally learned that lesson. If I hadn’t, I probably wouldn’t be here writing about one of my books.

RELATED: Ireland Taught Me to Fly

You see, I always wanted to write fiction, and for the first 25 years of my life, I spent a lot of time talking about writing a book but not actually writing one. Meeting my husband finally drove home the lesson that, if you want something, you need to go out and find it. So I finally got to work and wrote a book. It took almost five years to finish that first one, and then another 25 years and 15 more novels before one of my books was ever published. I could have waited for my muse to get me started. I could have given up waiting for rejection letters. But I knew only one thing: if I wanted to tell stories, I just needed to tell stories, and eventually I’d find someone who wanted to read them.

So, whatever your heart’s desire, you must go out and find it. 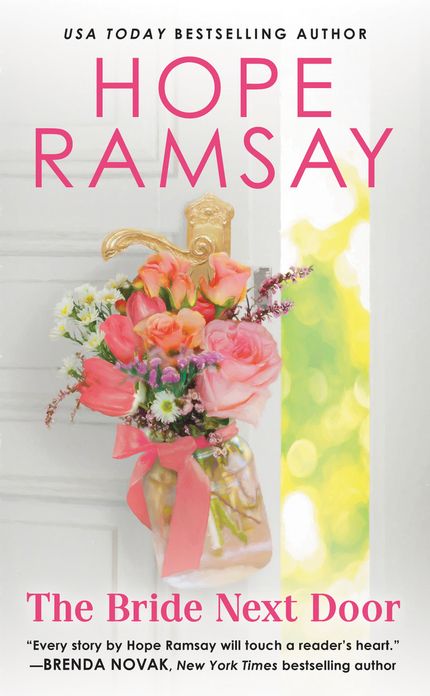 Hope Ramsay is a USA Today bestselling author of heartwarming contemporary romances. Her books have won critical acclaim and publishing awards. She is married to a good ol’ Georgia boy who resembles every single one of her Southern heroes. She has two grown children and a couple of demanding lap cats. She lives in Virginia where, when she’s not writing, she’s knitting or playing her 40-year-old Martin guitar. Find out more: www.hoperamsay.com. The Bride Next Door is out on April 3rd.