Get a Sneak Peek at Fearless, a Gripping New Novel from Fern Michaels

Read an excerpt from the dramatic story of desire and deceit. 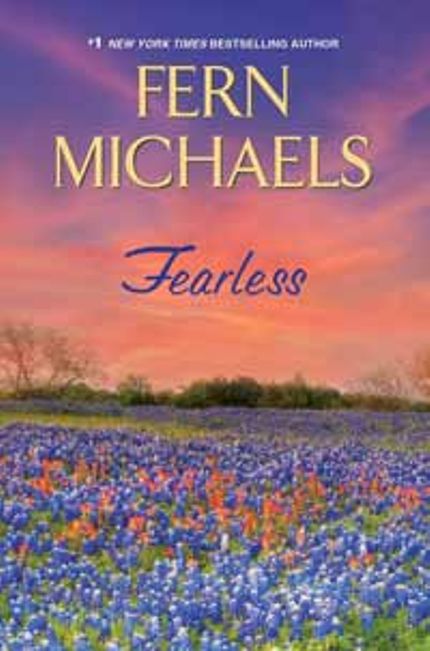 “Mandy, you know I can’t leave Christina. She’s only thirteen,” Anna said to her best friend and assistant.

“Yes, you can. I’m quite capable of caring for a thirteen-year-old, I’ll have you know. This cruise is just what you need. It’ll be fun. Just because it’s a singles cruise doesn’t mean you’re going to find a significant other just like that.”

Anna laughed. “I think that’s exactly what it means. You can’t put thousands of single people together, on a singles-only cruise ship, and not have expectations. It sounds fun, but it’s not really my cup of tea.”

“You’ve never even been on a cruise,” Mandy teased. “You might surprise yourself and actually enjoy being waited on hand and foot. Meeting new friends is simply a bonus.”

RELATED: These 12 Vacation Romance Books Are the Perfect Escape

Want more great romance? No need to beg! Sign up to get steamy stories sent straight to your inbox.

“Because someone has to keep you organized, and besides, I’m dating Eric exclusively now.”

“Hmmm, and when did this happen? I thought he was just a guy from the gym.” Mandy Martin was a total babe; she attracted men like bees to honey. At thirty-five, she’d never married and loved the single life. Anna was lucky to have her on her team. Tall, blond, and buxom were three words to describe her. Add in kind, smart and a huge heart, and this was who Mandy was.

“He was. At first. That’s what happens, Anna. You date, you find out you’re compatible, then boom, you sort of commit to date one another. Easy peasy.”

“Does this mean what I think it means, or am I being old-fashioned?”

“Probably not. It means we’re going to see what happens. When you’re dating five or six guys at once, it’s time-consuming. Not so easy getting to know any of them, you know?” Mandy said.

“No, I wouldn’t know from personal experience, but I get the picture,” said Anna. “I would feel completely out of place, not knowing anyone.”

“My point exactly! You’d be in the same boat, literally, as the other guests. You mingle, you see someone who interests you, say hi, ask his name. Say something cutesy, or you could go the traditional route and just introduce yourself. Whatever works. It’s the perfect solution for you.”

Anna thought her life was as close to perfect as one could get, given her circumstances. Being a single parent had its moments though she’d been lucky so far. Anna adored Christina and knew her daughter felt the same way about her. At thirteen, she was tall, like Wade, who’d been six-four. Christina was five-eight already, but that’s where the similarities ended. Minus her height, she was a carbon copy of Anna. With her reddish brown hair, aqua-blue eyes, full lips, and olive skin, Anna often thought of her as a mini version of herself. They laughed about this, Anna telling her at least she would know what she might look like when she was her age. At forty-one, she hadn’t aged too much; but she knew that in this age of fillers, plumpers, and sunscreen, Christina’s generation would age exceptionally well if they took care of themselves while they were young. Living in Texas, sunscreen was a necessity. She had used it most of her adult life and insisted that her daughter do the same.

Sighing, she knew that if she didn’t give her an answer, Mandy would never let up. And why not? she thought. They were weeks ahead with her filming schedule; school was out for the summer. Christina would be fine without her for a few days. For Christina’s thirteenth birthday, Anna had given her an adorable tabby kitten whom they’d christened Mr. Waffles because of his wafflelike coloring, and now she spent most of her free time with him. So she doubted she’d be missed.

“Give me the details, and I’ll start packing,” Anna said, enjoying the surprised look on Mandy’s face.

“Yep,” she replied, grinning. “I need a break. After what I’ve been through the past couple of months, it will be a relief.” Anna had been stalked for weeks, probably by a crazy fan. The police had been called in and launched an investigation, but so far, there’d been no arrest. Fear and looking over her shoulder had taken its toll on her. She truly needed a vacation.

“I wouldn’t do that to you. I could use a break. Not sure how this cruising the high seas works, but I’m willing to give it a try. However,” she said, “not a long cruise. One week max. I’m clueless how I’ll react, so that’s all I’ll commit to. And you have to swear on your life that you’ll be extra watchful. Christina still has no clue about all this insanity.”

“I’ll guard her with my life—you know that. You’ve spent most of your life around water when you lived in Corpus Christi, so you’ll be fine. I’m going to book this cruise before you change your mind. It’s Wednesday, and the Splendor of the Sea departs this Friday. That should be enough time to pack a few things,” Mandy said. “Leave the details to me.”

If Anna didn’t know better, she would swear Mandy had an ulterior motive, but she’d always been up-front with her since day one, so she pushed the thought aside. She needed to rest and recharge, and this was as good an opportunity as any. She would relax and try to catch up on all the books piled up by her bedside. “I would say thanks, but I’ll wait until I’m back.”

“Anna, you don’t have to go,” Mandy said. “You work so hard, and we’re way ahead of schedule. Though I kind of promised Christina I’d take her to SeaWorld.”

“I knew it!” Anna laughed. “You two sneaking behind my back again?”

“Not really; it just came up in conversation a couple of weeks ago.”

“And what about Mr. Waffles?” Anna asked.

“SeaWorld has a pet-sitting service. I checked.”

“My cousin has a time-share in Orlando. She’s not using it, so she offered it to me, and the idea blossomed from there. I checked the airlines, and there is a flight out of Lubbock on Friday.”

“Then, yes, you can take Christina and Mr. Waffles while I…do whatever I’m supposed to do.” She’d feel better knowing Mandy and Christina were out of town.

“I promise, you’ll have a good time. You know I’ve been on more than a dozen cruises, and I had a blast every time. You’ll be surprised at all the activities on and off the ship. Maybe you could vlog. No, forget I said that. This is a vacation from vlogging. Though you could take pictures.”

“Right. So, I can call the travel agency?” Mandy asked. “They’ve kept a room on the upper deck open for you; it’s the best they have. We can fly to Orlando together. I don’t think the flight was completely booked.”

“Consider it done,” Mandy singsonged, taking her cell phone from her pocket. Mandy was the ultimate vacationer, being single and gorgeous. They’d hit it off right away when she’d applied for the assistant position, and they’d been best friends ever since.

Anna shook her head, amazed that she’d so readily agreed to Mandy’s plans. She really did need some time away from work. As much as she enjoyed working, a few days to herself would be nice. Factor in the fear she’d been living with for the past few weeks, and Mandy’s cruise plans couldn’t have happened at a better time.

Related: 10 Romantic Suspense Books to Send Chills Down Your Spine

Since Wade’s death, she had dated a few guys, but there was nothing serious with any of them. Except one. Sort of. James Banks. She wasn’t really that serious about him, but he had been more than serious about her. He was a photographer she’d met while on location shooting a video for her YouTube channel. A true charmer. Blond, blue-eyed, and sexy as hell. She’d enjoyed spending time with him; he made her laugh and forget about the past. They’d already been seeing one another for three months when she learned he was still married. Feeling like a total fool, she’d broken it off immediately. He tried to convince her that he was in the process of getting a divorce. Anna adamantly told him no, see you later, have a nice life. She didn’t need or want anyone’s excess baggage. He’d called her numerous times, pleading for a second chance, but she’d politely told him he wasn’t the one for her. He’d been hurt, but she knew he’d get over her, as he was quite handsome and outgoing. No doubt, women would line up just to have a date with him. She didn’t need a man in her life. She and Christina had gotten along just fine without one in their lives, and she was positive she would continue to do just that.

Though late at night, when she was alone with her thoughts, she questioned her choices and how they would affect her daughter’s future. Anna hoped that the absence of a male role model in Christina’s life would not have any serious negative effects on her. She tried her best to be both mother and father, and so far, she hadn’t heard any alarm bells ringing. Yet the issue was always present in her mind, especially now that Christina was a teenager. Hormones and peer pressure were very real. She didn’t want her daughter to feel like she couldn’t come to her if she had problems with school, her friends, or anything she wasn’t sure of or comfortable with. So far, they’d shared a super mother-daughter relationship, and she prayed it would continue.

Want more great romance? No need to beg! Sign up to get steamy reads sent straight to your inbox.