First Read: The Republic of Love, by Carol Shields

The Pulitzer Prize winner's novel is a celebration of love in all its wild, weird, and wonderful glory.

When I read the descriptive copy of Carol Shield’s 1992 novel, The Republic of Love, I was fairly certain I’d found My Kind of Book. I'm a sucker for literary love stories as it is—think Lauren Groff's Fates and Furies—but throw in a dose of mermaid mythology, plus a Sleepless in Seattle element, and you've got a recipe for inflating my heart like a balloon. Having now finished The Republic of Love, I can confirm that my suspicions were correct: My heart is, indeed, very full.

Fay MacLeod is an unhappy-in-love folklorist whose relationship with Peter, a man of “puffball innocence,” has fizzled. To her, eating breakfast alone is the epitome of luxury, and love is "the start of the serious illness...illness itself" (but one she craves nonetheless). Meanwhile, Tom Avery is an unlucky-in-love radio host and three-time divorcé. Despite his murky marriage history, Tom has a less cynical view of love—in fact, he’s ready to make big life changes in hopes of finding The One. Both Tom and Fay bumble along their respective paths until, one day, girl meets boy and boy meets girl. There’s a serendipitous realization that they're neighbors. There’s a clandestine, if not endearingly awkward, embrace. And then bam! Cue Etta James’ "At Last." It's Love with a capital 'L.'

Obviously, the premise of Shield's novel is neither terribly original nor especially surprising. It doesn’t move at a breakneck pace, and there are no skeletons that emerge from closets. It also isn't a "romance novel" in the standard sense of the term. Rather, The Republic of Love is about two very normal, very relatable human beings who instantly click. You know these people, have probably been these people at some point in your life.

This is not to say that The Republic of Love is boring. In fact, it's compulsively readable (I read it in two days!), which is largely due to Shields' incredible wit and writing. Sure, it doesn’t charge full steam ahead, but there’s something to be said for this restraint—its willingness to let its characters simply exist. And not only that, but exist separately for nearly half of the novel. While this may deter readers accustomed to more fast-paced romances, understanding Tom and Fay as individuals ultimately worked in the story's favor.

Looking for more literary romance? Sign up for A Love So True's newsletter and get our recommended reads delivered straight to your inbox!

We see the everyday moments that make Tom and Fay who they are. We meet their friends (Fay has an elderly pal-slash-love guru who is inexplicably called “Onion”; Tom is a bachelor in a sea of couples). We meet their families (Tom was raised by 27 mothers at a university; Fay values her close friendships with her still-in-love parents). We discover their personal failings (Fay is too afraid to commit; Tom is too eager to commit) and personal fascinations (Folklore! Reggae music!). We get to fall in love with Tom and Fay before they get to fall in love with each other. It’s why I think the “love at first sight” trope is successful here. By the time Tom and Fay actually met, I knew them well enough that I couldn't imagine why they wouldn't be (or want to be) together.

Their "meet cute" is a long time in the making, but the delay is bizarrely satisfying—as is the awkwardness of the moment (I didn't know a man stuttering, "What I'd really like is to put my arms around you for a minute," without preamble could be so adorable). Shields perfectly conveys the giddiness that comes with falling in love: Nothing makes sense, and yet everything makes sense. Suddenly, I was a high school senior again, ditching track for my new boyfriend, and certain in my belief that this was It.

That’s the thing about this book. Shields unabashedly embraces the concept of a love story—of two rational adults giving in to the irrational feelings of love—even though it isn't "cool." When people side-eye Fay and Tom's whirlwind courtship, Shields addresses the belittlement of real and fictional love:

"But Fay's noticed something she's never noticed before. That love is not, anywhere, taken seriously. It's not respected. It's the one thing in the world everyone wants—she's convinced of that—but for some reason people are obliged to pretend that love is trifling and foolish...It's womanish, it's embarrassing, something to jeer at, something for jerks. Just a love story, people say about a book they happen to be reading, or caught reading."

For some reason, it's silly to be hopelessly head over heels, as Tom and Fay are. "The miracle of it," as Shields writes, isn't something sensible adults want to, or should, acknowledge. As romance readers, I think we've all had an experience where, after revealing our preferred genre, our tastes are suddenly considered lesser than someone who likes Jonathan Franzen. Romantic movies, shows, and Taylor Swift ballads are approached with an odd sense of shame—despite the fact that everyone wants a piece of that love themselves.

But here, Shields lets her characters be a little ridiculous, make rash decisions, write a one-paragraph note that says "I love you" ten times. The novel is a celebration of all these things—the wonderful, pathetic, hilarious ways love compels us to act wonderfully, pathetically, and hilariously. There's nothing wrong with being vulnerable and wearing your heart on your sleeve.

Look, is The Republic of Love a groundbreaking piece of romantic fiction? No, probably not. But is it a gorgeously written and observant hug of a book that reminds you why you love to read about love, why we love to be in love, and why we all chase after love? Absolutely. 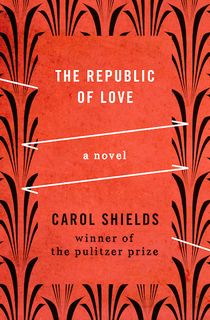 Looking for more literary romance? Sign up for A Love So True's newsletter and get our recommended reads delivered straight to your inbox!