Review: The Wall of Winnipeg and Me

This story of enemies-turned-lovers is a titillating touchdown.

Just because I decided to boycott football this year to protest the NFL's blatant corruption and the fact that it seems to condone violence against women and animals, doesn’t mean I can’t enjoy a good football romance! For my first foray into the sub-genre, I read The Wall of Winnipeg and Me by Mariana Zapata. (Amazon recommended it during my Kindle Unlimited trial last month.)

The first thing I liked about Winnipeg was that there wasn’t much football to speak of. The heroine is rough-around-the-edges graphic designer Vanessa Mazur. Although Vanessa is a freelance designer by night, she makes her living wage as the assistant to the National Football Organization’s top defensive lineman Aiden Graves, a.k.a. the Wall of Winnipeg.

Aiden is a Canadian with a cold heart–at least that’s how it appears to Vanessa, who has tried in vain to befriend her gruff boss. After saving up money to support herself as a freelancer, Vanessa decides to quit her assistant gig. Aiden doesn’t seem to care, and even lets his asshole manager make fun of Vanessa’s weight. Vanessa takes this lack of loyalty from Aiden very personally, and she storms out. (That slip up will definitely come back to bite Aiden in the ass later.)

Shockingly, Aiden shows up to her rundown apartment weeks later with a request: He wants Vanessa to marry him because his visa is about to expire, and he wants to stay in the U.S. after all! Plus, paraphrasing his words, he likes Vanessa as much as any other person he’s forced to be around on a daily basis.

Who could resist that proposal? Not Vanessa, who is getting a new house and her school loans paid off as part of the deal.

Want more romance reviews? No need to beg! Sign up for our newsletter, and get our takes on titillating tales delivered straight to your inbox.

So Vanessa packs up her meager belongings, and moves into the guest bedroom at Aiden’s house. But this time, she’s not an employee.

Since the book is from Vanessa’s point of view, the reader doesn’t get a lot of time on the field. At one point Vanessa has to attend Aiden’s game to keep up the fiancé / spouse charade, and later, she goes to games because she actually starts to care about Aiden and wants to support him. But most of the action takes place at home or other locations that are important to Vanessa.

One of the best scenes takes place at a romance convention, where Vanessa has a booth to advertise her graphic design business. She’s so nervous about attending the event; she thinks people will heckle her. So she’s quietly sitting in her booth, and Aiden shows up unexpectedly. People come over to the booth to get his autograph, which turns into a good business opportunity for Vanessa. But it warmed my heart to see Aiden teasing Vanessa (with his dry sense of humor), bringing her food, helping her with her stuff, and just generally supporting the strong woman who has had his back the whole time.

Related: Sexy Excerpt: All In

The book is very much a slow burn, which means nothing remotely sexy happens until almost the end of the 673-page book. But, trust me, the payoff is WORTH. IT.

Other things that happen in 673 pages: a best friend in an abusive relationship; major parent issues (both Vanessa and Aiden); sports injuries; a roommate going through depression; training for a marathon; an altercation with a sibling; adopting a puppy (strong man with adorable dog, yes!); jigsaw puzzles as therapy; night lights; vulgar gestures and lots of cursing; enemies-to-friends-to-lovers; a Las Vegas wedding ... and so much more.

Although I don't need to empathize with the main characters in a book–and I certainly had no previous of knowledge of what it's like to be a professional football player or sassy graphic designer–both Vanessa and Aiden were such hard workers and passionate about being the top of their fields. And I think that's what I appreciated about them the most. I think it's also what really drew them to each other in the end.

If you’re a football fan, The Wall of Winnipeg and Me might not replace your Monday night plans. But once you get to the part where Vanessa and Aiden finally sleep in the same bed together—and the sexual tension reaches an all-time high—I bet you won’t be able to put it down. 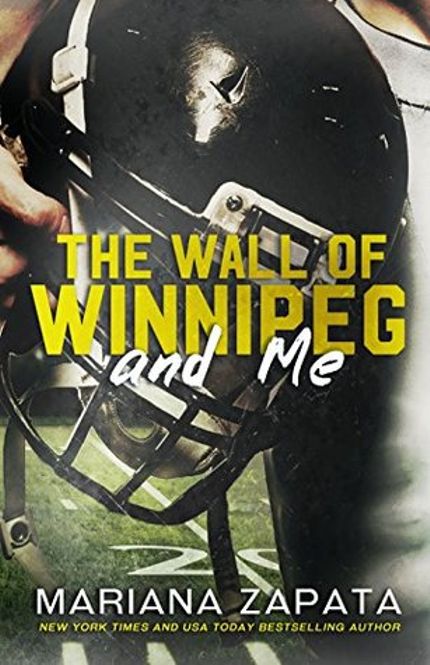 Want more romance reviews? No need to beg! Sign up for our newsletter, and get our takes on titillating tales delivered straight to your inbox.