Once enemies and now spouses, Eric and Igrainia's hate is turning to white-hot passion.

It’s 14th-century Scotland, and while things are certainly cold, they’re about to get a little steamy—thanks to a hot Scot and the English rose he just can’t resist.

It is 1307 and Robert the Bruce has crowned himself King of Scotland and Edward I is King of England and is determined to wipe out Bruce and his rebel force by any means necessary. Eric Graham is no friend of Edward I, King of England, especially after his launched crusade against Scotland’s new ruler. The animosity is certainly mutual, placing Eric on the wrong side of the law and staunchly against the English.

That's why Eric has zero compunctions about whisking away the innocent Lady Igrainia, a widowed earl’s daughter whose healing gifts have become essential with the onslaught of the plague. Eric’s wife and child are among those afflicted and, having captured Igrainia, demands she cure them. But despite her best efforts, even she cannot prevent her late husband's fate from also befalling the Graham women.

Craving more Scottish romance? Dinna fash! Sign up for our free newsletter and get steamy reads delivered straight to your inbox.

Luckily, she can cure one patient—Eric himself—after he falls ill during his siege of Igrainia's home, Castle Langley. Eric falls prey to the plague but with Igrainia's healing powers is able to fully recover. Back on his feet once again, he decides to use her as a pawn in the conflict between Robert the Bruce and the King Edward I. He intends to allow Robert Bruce to use Igrainia as a bargaining chip to free Bruce's women held by King Edward I, since she is the daughter of an earl. When his attempts at bargaining for the release of his people do not succeed, he's ordered to irk the king in other ways—specifically, by marrying one of his subjects, and thus securing the rights to her English land. In the blink of an eye, Igrainia goes from widow to war prisoner to wife.

Eric forces Igrainia to wed him and eventually gets her with child in order to validate the marriage. But once they’re wed—and despite Eric's mourning of his wife and daughter—Eric’s feelings start to change, and he wonders if his captive is actually his soul mate. Igrainia, too, begins to yearn for the soft heart she suspects lies beneath Eric's armor (and for something that isn't so soft beneath his kilt). The strong-willed Igrainia soon realizes that Eric is an honorable man as opposed to the English leaders who would use her. In the following excerpt of Knight Triumphant, their rising sexual tension is on full display, as Igrainia joins a post-battle victory celebration with Eric and his fellow warriors…

Knight Triumphant is the fourth book in the Graham Clan series, which follows a Scottish family through battles of the heart and the battles of war.

Click here to read an excerpt of Knight Triumphant by Heather Graham, and then download the book. 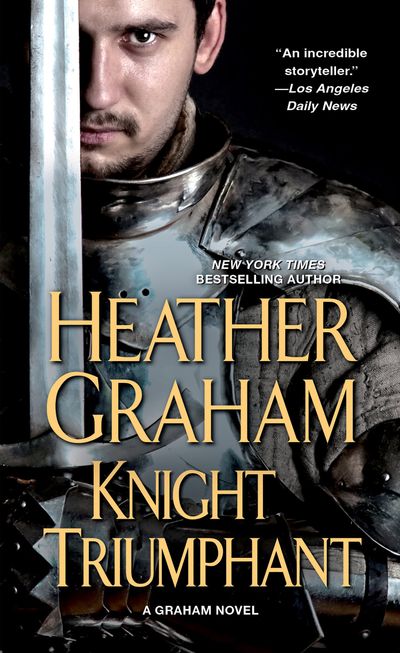