Johanna Lindsey’s latest book in the Malory Family series set on the high seas will leave you breathless.

Love and hate are two sides of the same coin. And no one knows that better than Jacqueline “Jack” Malory.

Jack was kidnapped by a pirate she calls "Bastard," and taken to the Caribbean. She was returned unharmed, but Jack—and her father James Malory—still want revenge. James, along with his in-laws, the Andersons, makes it his mission to keep Jack as far away from those dastardly pirates as possible—leaving her behind while he sails to deliver his own kind of retribution.

Meanwhile, Jack's back in London where 12 suitors are vying for her heart—even though she has no intention of giving it away. But when she meets a handsome stranger at a masquerade ball, she’s taken aback by his wit and charm—and his interest in getting to know her more…intimately. But what she doesn’t realize is that her masked suitor is actually the very pirate who kidnapped her. And the most dangerous thing of all might be their undeniable attraction to one another.

Beautiful Tempest by Johanna Lindsey is the 12th book in the Malory Family series. Fans of the series will fall hard for this standalone, high seas romance that follows the love story of the headstrong, self-possessed Malory daughter and her dangerous, swashbuckling beau.

Read on for an excerpt from Beautiful Tempest, and then download the book. 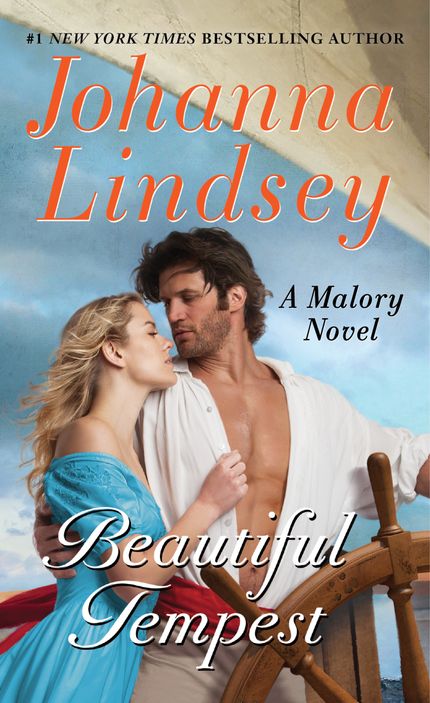 After what Jack had overheard at Haverston while she and Jeremy had eavesdropped, she wondered if her mother was blushing under her domino. The real temptation was what Georgina had dangled in front of James to get him here. But their hostess wouldn’t know that and seemed utterly thrilled by his words. Jack’s father certainly hadn’t lost his touch with the ladies.

But he didn’t fail to notice that one of Jack’s beaus had found enough courage to approach her while James spoke with Lady Spencer. Jack noticed as well and was pleased that not all of her beaus were afraid of her father.

The tall, blond-haired fellow, whom she couldn’t immediately identify because he was wearing a full face mask, gave her a half bow and extended a hand. “Would you do me the honor?”

Gallantly said, and he cut an impeccable figure in his black tailed coat that fit his muscular physique extremely well. Jacqueline placed her fingers lightly over his and allowed him to lead her onto the dance floor. She felt a distinct measure of excitement, but only because she hadn’t placed him yet and was determined to.

It was the first thing Jacqueline asked. “Which one are you?”

“I’m supposed to tell?” He had a deep voice, but it was muffled by his mask.

“My other beaus have revealed themselves. Quite takes the fun out of a masque ball when you no longer need to figure out who you’re dancing with.”

So, she’d have to rely on deductive reasoning! Now this was the fun she’d expected to have tonight. “I already know who Bernard, Jasper, John, Addison, and Ellis are, but that still leaves Lewis, Rupert, Peter, Giles, Hugh, Thaddeus, and Chester.”

He laughed under his mask. “D’you really have that many suitors?”

“It does sound a bit much, doesn’t it?” She laughed softly, but then she realized he would already have known that if he were one of them. “Are you pretending you don’t know who I am?”

She was taken aback. “If you really don’t know, why did you ask me to dance?”

“How could I not, when you’re the most beautiful woman here?”

She laughed again because he couldn’t say that when her face was mostly covered by the domino, not without knowing exactly who she was. So he was teasing and she was actually delighted by it. It was quite refreshing, from one of her beaus. But she still hadn’t guessed who he was.

She got back to the matter of figuring that out. “I’m sure a few of my suitors aren’t really serious in their pursuit. I know Giles isn’t, since he fancies himself a bit of a rake. However, three of those who haven’t revealed themselves to me yet tonight aren’t as tall as you, and Peter isn’t as strapping.” She paused for a quick admiring glance down his length. “So that just leaves Lords Hugh, Rupert, and Thaddeus.”

“Maybe I should give up before I start?”

She chuckled. “Afraid of a little competition, are you?”

“You call twelve men a little?”

“To be honest, they weren’t all mine to begin with,” she admitted candidly. “I inherited some of my cousin’s suitors when her wedding was announced recently. And you can certainly give up if you like, but there won’t be any heart winning in either case.”

“Then, like your cousin, you’ve already decided whom to marry?”

“Gads, no. What I’ve decided is not to marry this year a’tall, maybe not the next, either. I’m quite on the up-and-up about that and have made sure to tell them all. They just think I’m pulling their collective legs, when I’m not.”

“Why follow the pack?” She laughed. “That’s definitely not for me. And what’s the hurry anyway? Because it’s expected of a young lady to marry during her first Season?” She gave a soft snort. “So you’ve been warned, as have the others. But then you already knew that, if you’re one of them.”

A shimmer of excitement ran through her when she heard that. So he hadn’t been teasing after all? He was someone new who’d come late to the Season? But, no, latecomers stirred up the gossip mills for a few days, so she would have heard by now if a new lord were in town.

He might be one of the young men she’d met at the start of the Season who were interested only in marriage and expected to be engaged before the end of it. Once they heard her candid declaration that she wouldn’t be marrying this year, they’d wished her well and ignored her after that. But one might have changed his mind and was now determined to change hers—by gaining her interest before she knew who he was.

The only other young lords in town wouldn’t ordinarily come to an event like this since they weren’t interested in getting married yet. Most rakes were determined to spend some years gadding about before they got down to the business of producing an heir. And the second and third sons of a titled parent felt less pressure to marry than the family’s heir. But due to the masquerade theme of this particular ball, they could more easily sneak in without an invitation. And the thought made her realize, so could anyone else.

“You’re too quiet. Already bored with me?”

Having her thoughts interrupted brought the complaint “It’s bloody annoying when variables sneak up on you.”

“Didn’t you say you wanted to be?”

“I wouldn’t put winning your heart in that context, but if you’re whittling down your extensive list of suitors so you can add me to it—”

“I don’t whittle it down,” she cut in. “I just keep count. But I like to do a little research, so if you aren’t one of the fellows who frequent these parties, are you a rake, a second son, or a workingman?”

“That would be revealing too much.”

Jacqueline grinned. “Sticking to an aura of mystery, eh?”

Hungry for more sizzling romance? No need to beg! Sign up for our free newsletter and get titillating tales delivered right to your inbox.

She imagined he was smiling when he replied, “It does seem to amuse you, so, yes, I believe I will.”

“Well, at least you’re not a beggar, dressed as you are,” she said with confidence.

“I could have stolen these clothes.”

Her brows shot up. “A criminal?”

“Overlooked that variable, did you?”

“You could reform me.”

“Even if I’m otherwise quite dashing, charming, and just what you need to keep things interesting?”

She started to turn away, quite disappointed that he was the one thing her father could never be brought around to accept, even if she could. But he kept her there by tugging her closer to him for the briefest moment, brushing her chest against his. It was quite surprising, that touch, and titillating, making her nipples tingle. But that he would dare detain her was the bigger surprise.

“I was jesting,” he was quick to say. “I’ve only ever broken the law one time that I can recall, and it was a minor offense where no one got hurt, certainly nothing to warrant me being called a criminal.”

If he would admit that much, then it must be true, but she still wanted to know, “Then what was it?”

“Only about marriage. Don’t want to give them hope when there isn’t any.”

“If I’m only destined to be a friend—for a year or two—perhaps you will meet me after the ball so we can start getting better acquainted?”

Instead of being affronted by such a breach of etiquette, Jacqueline chuckled. She was pleased that one of her guesses appeared to be on the mark. “So you’re a rake of the more daring sort? Much as I’d like to be one m’self, I’m not going to tempt my father into killing you. So, no, I shan’t meet you so late at night.”

“A stroll on the terrace then, where I won’t have twelve pairs of eyes frying me?”

She chuckled. “What you would get is my father tossing you over the railing out there, or did you think his eyes aren’t also watching you like a hawk? But you might find me riding in Hyde Park tomorrow afternoon, should you care to join me—without your mask.”