In An Extraordinary Union by Alyssa Cole, Union Spies Fall in Love While Fighting the Confederacy

Read an excerpt from this highly-acclaimed historical romance today.

Alyssa Cole's An Extraordinary Union hit shelves in 2017, and quickly became a critical and popular hit.

This Civil War-era romance about two Union spies falling for each other while they fight the Confederacy made top-ten lists in Publishers Weekly, Entertainment Weekly, and Kirkus, and was proclaimed a "marvelous, intelligent, respectful, breathtaking treat for your brain" by Smart Bitches, Trashy Books.

The book centers around Elle Burns, a former slave with a remarkable memory. Hungry for justice, Elle sacrifices freedom in Massachusetts to return to the South, where she puts her unique talent for recall to work against the Confederacy.

Malcolm McCall is an undercover Union operative in Virginia. In the excerpt below, Elle and Malcolm discover they are unlikely allies. The pair must unite to prevent a tide-turning Confederate victory—and discover their undeniable attraction in the process. 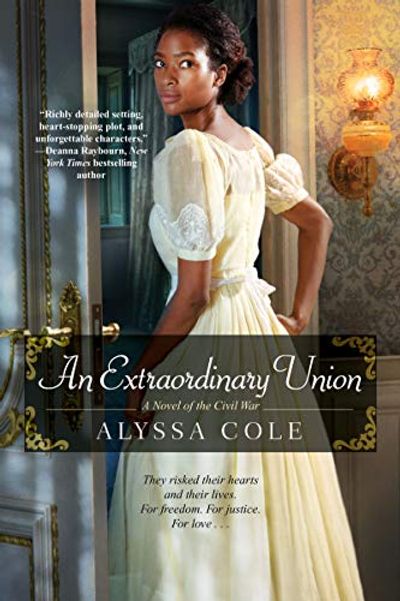 Elle reached the meeting point, a secluded bluff overlooking the James. The setting sun stretched its fingers down the length of the river, its fiery caress tinting the waves with dabs of orange and gold.

Elle admired the water as it churned by, powerful enough to break free of nearly any restraint, and she was envious. She pulled her cloak closer and shivered in the river breeze as a familiar weariness descended upon her. She pushed through it, fighting the undertow of exhaustion that tugged at her skirts and her eyelids. There was a time for fatigue, and that was when the infernal war was over. She’d be a lot more tired working a field all day if the Union were to fall, that was certain.

A twig snapped behind her and she whirled.

Standing before her, once again, was Malcolm McCall. The last rays of winter sunlight glinted off of the buttons of his jacket, like a warning flashed from afar. Had he followed her? Perhaps his earlier deference had been a misdirection.

RELATED: The 24 Best Historical Romance Books That Will Steal Your Heart

“Miss Elle? What the devil are you doing here?” he asked, his voice low. Something in that voice made her warm where she should have been cold, the very last thing she should be feeling. It also sparked a memory, one that hovered just out of reach. She wasn’t used to the sensation of wracking her mind for something and coming up empty. Why did he have this effect on her?

“Are you here for a rendezvous?” he asked. He took a step toward her, and she tried to discern if he had been tipped off about her meeting, and whether she could reach the blade in her garter quickly enough. If he rushed her, she could give him a quick jab and redirect his momentum and use it to send him over the edge of the cliff—

Malcolm’s incredulous bark of laughter cut off her scheming. He shook his head and regarded her much too appreciatively. “I’m here because I received a missive from an associate, but that couldn’t be you,” he said. “Could it?”

Elle felt a sting of indignation alongside her confusion. Was Malcolm McCall really the package Timothy had arranged for her to pick up? This man who couldn’t fathom that she could possibly be the operative he was supposed to meet? If he was, she wasn’t going to cut him any slack. There were protocols, and if he was truly supposed to be meeting her he’d have to abide by them. She crossed her arms and looked off into the distance, pretending to ignore his presence.

When she glanced at him from the corner of her eye, he seemed to understand that she was waiting for something.

“Well, I guess I have to give you some kind of sign,” he murmured, stroking the evening stubble on his chin. Elle tore her eyes away from the rhythmic movement. “Is there a password? Is it ‘many one’?”

That was close to the most recent Loyal League password, but she would take no chances. Besides, she enjoyed seeing him outside of his comfort zone. She was distinctly outside of hers, and why should she be the only one?

“This is ridiculous. That’s what the paper said. Many. One. Am I supposed to pull the password out of my—”

She glanced at him sharply, and he paused, assessing her body language.

Elle nodded and was rewarded with his brilliant smile.

“So you’re a friend of Abe, not an admirer stalking me through the woods,” she said, her voice husky from disuse. “I suppose I should be relieved, although I’m not certain what help you can provide us.” His eyes went wide, and she prepared for him to give her the same boring diatribe about women working in the field that she’d come to expect.

“You can talk,” he said. He raised his hand toward her and moved it in a quick circle. “Well? Keep at it.”

“Pardon?” Elle asked, crossing her arms even more tightly. For a moment, she was back on the stage of a small theater, a sea of white faces staring at her expectantly. She hated that he could make her feel that way. Thus far, every interaction with McCall had left her at a disadvantage. She thought she understood people and their motivations better than most, but she couldn’t guess at what he was doing—or why.

An amused grin lightened his features as he advanced, giving Elle a glimpse of the mischievous boy he must have been. He pushed his hat back and rubbed his forehead with his fingertips, like a student tasked with long division.

“I’m sorry. It’s just ... I shouldn’t admit this, but I’ve spent a good part of the afternoon wondering what your voice would sound like if you could talk. And now you can, and it’s prettier than anything my weak imagination could come up with.”

Elle wanted to be furious at his forwardness, especially in light of their first meeting, but something about the man was just pure engaging. She could see why he’d make a good detective. In order to be successful, she had to be quiet and unseen, but Malcolm had a different kind of talent. Something about him was naturally attractive, made you want to sidle up next to him and hear every tall tale he spit out and then tell him your own. There was some relief in the realization that his magnetic pull was part of his skill set, that it was natural for her to be affected by him.

She scowled at him. Just because it was natural didn’t mean she had to like it.

Want more from your favorite authors? Sign up to get the best in sci-fi and fantasy sent straight to your inbox!

An Extraordinary Union is the first book in Alyssa Cole's Loyal League series, followed by A Hope Divided and An Unconditional Freedom.

Cole was awarded the 2017 Reviewers' Choice Award for Historical Romance and the 2018 Reading List Award for Romance, both for An Extraordinary Union.