Two Strangers Can't Deny Their Attraction in This Scottish Romance

Liam and Keira are fighting for their people, and each other, in ‘Highland Champion.’

Sometimes dreams are sweeter than reality. But what happens when your dream is reality?

After Liam Cameron comes face-to-face with death, he expects nothing but raging pain when he emerges from his stupor. But when he opens his eyes, he’s met with the face of an angel. Keira Murray MacKail saved his life, and now ... he can’t stop thinking of the ways he’d like to thank her.

But Keira has a story of her own: She’s a laird’s widow responsible for protecting a small village under siege by merciless invaders. While fighting to reclaim his own homeland, Liam faces another challenge of winning the trust and love of Keira. As both Keira and Liam fight for the people they love, they find themselves slipping irresistibly closer to each other. Soon, what began as lust breaks way to a voracious craving neither can resist.

Read on for a steamy excerpt from Highland Champion, and then download the book. 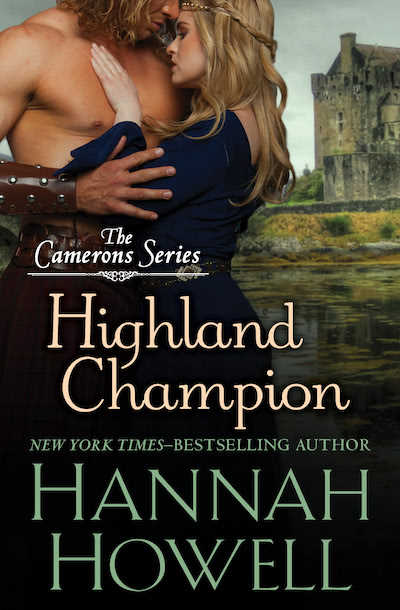 Smooth, warm skin heated the palms of her hands, and Keira murmured with pleasure. Liam did have a lovely chest. She had seen men’s chests before. In her capacity as a healer, she had even touched a few. Yet she could not think of a one that was as fine as Liam Cameron’s. It was the first time she had ever felt it so clearly in her dreams, however. Despite the nagging voice in her head that said it was time to wake up, she decided she would linger in this dream for a little while longer.

She pressed her cheek against his taut skin and smiled faintly as she heard the pace of his heartbeat increase. At least in her dreams she could stir his interest. In her dreams, she was always sultry and tempting, the sort of seductress that made men pant. To hear Liam’s breathing grow louder and unsteadier was sweet music to her ears. She ignored the whisper that flitted through her mind, saying that Liam was a man who panted after anything in a petticoat. It might be true, but in her dream, all she cared about was that he panted after her.

Since this was a dream, she gave into the temptation to kiss, and then lick, that warm skin. A softly hissed curse tickled her ears. Keira smiled against his skin and murmured his name. It made her almost light-headed with delight to know she could stir the blood of such a handsome man.

Long fingers threaded through her hair. She sighed with pleasure. When those lightly calloused hands gently cradled her face and exerted a little tug, she freely obeyed the silent request and tilted her head back. Warm, soft lips pressed against hers, and Keira was astonished by how clearly she could hear, feel, and taste her dream lover. When he nudged at her lips with his tongue, she readily parted them. The feel of his tongue stroking the inside of her mouth roused a heat within her so strong and sweet, full consciousness began to intrude upon her dream. She clutched his trim hips to pull him closer, desperate to remain unaware, to ignore the harsh voice in her head that said she was not dreaming. If this was not a dream, she would have to put a stop to it, and she did not want to.

Want more steamy stories? Sign up for A Love So True's newsletter, and get our favorite romance books delivered straight to your inbox.

‘Lass,’ Liam said, not surprised by the hoarse rasp of need roughening his voice, ‘if ye dinnae get your hands off me now, ’twill soon be too late to retreat from this.’

The sound of that deep voice tore away Keira’s lingering confusion, and she opened her eyes. She stared into Liam’s eyes, noting what a warm blue color they were for a moment before the heat of a fierce blush burned her face. She pulled away from him so abruptly she paid no heed to how close to the edge of the bed she was. A soft screech escaped her as she struggled vainly to regain her balance and then hit the floor hard. Liam peered over the edge of the bed, his eyes alight with laughter, and she closed her eyes.

‘It wouldnae be wise to laugh, Sir Liam,’ she said, embarrassment and anger at herself making her tone of voice impressively hard and cold.

Liam sprawled onto his back, closed his eyes, and did his best to suppress both his urge to laugh and the desire racing through his body. When he had first felt her soft caress upon his skin and had noticed that her eyes were closed, he had feared she thought she was abed with her late husband. She had not been a widow for very long, and while still asleep, such confusion was possible. Then she had murmured his name. The desire he had been fighting to control had abruptly snapped every bond he had put on it.

He had known then, and still knew, that it was far from gallant to take advantage of Keira when she was still more asleep than awake, but he felt no guilt. From the moment he had set eyes on her, he had wanted to taste that sensuous mouth. It had proven to be as sweet as he had thought it would be. Then his sense of honor had reared its troublesome head. Once it had cleared some of the lust from his brain, he had also realized that he did not want to trick her into his arms. He wanted her to come to him willingly and fully aware of what was happening.

The sound of Keira hurriedly dressing reached his ears, and he chanced a peek at her from beneath his lashes. He did not think he had ever seen a woman blush quite that brilliantly. She also looked very cross and a little distressed, but he hardened his heart to her upset. That kiss had verified all his tentative hopes and exceeded all of his expectations. She would not be allowed to turn back now. He might have to steal a few more kisses before she accepted the strength of the passion that flared between them, but he was up to the task. Since his intentions were honorable, he felt no guilt over his plan to seduce her. Brief though the embrace had been, it had given him a taste of a passion hotter and richer than any he had ever felt before, and he intended to claim it for his own.

Liam’s silence only added to Keira’s embarrassment. In the brief time in his arms, caught between a dream and reality, she had exposed her desire for him. There would be no denying it now. He simply would not believe her. Desperate to get away from him, to regain her wits and self-control, she started out of the room.

‘I will return shortly with something to break our fast,’ she said and made her escape before he could reply.

Slowly, Liam sat up. He took a few deep breaths to banish the remnants of his lust, although he suspected his body would ache with unsatisfied need for a long while. His little bird had flown for now, but she would not go far. While he dressed and waited for her to bring them some food, he would carefully plan the first step of his campaign to woo and win her.

Keira held the tray laden with food and drink and stared at the door of the bedchamber. She had stayed away for almost an hour, earning a few curious looks from Mary. A brisk walk in the chill morning mists had cleared her head but little else. She could still feel the warmth of his skin on her palms, still taste his kiss, and it made her ache.

Lust, she decided, was a treacherous thing. She had been able to keep it a secret, use it only to sweeten her dreams, but that kiss had unleashed it. It wanted her to ignore every rule and all good sense. It did not care if her heart was at risk. It was a mindless hunger. Keira greatly feared it could easily make her become the greatest of fools.

Wishing it were his shin she was abusing, Keira kicked at the door. Liam opened it, but stared at her legs. He then looked up and down the hall.

‘What are ye doing?’ she asked.

‘Looking for the verra wee person who knocked at the door,’ he replied.

Biting the inside of her cheek to keep herself from laughing, Keira gave him what she hoped was a very stern frown. With a faint but impish grin on his face and a glint of laughter in his eyes, the man was almost endearingly attractive. It was probably one of but many ways he seduced so many women, she reminded herself. Her anger renewed, she nudged him out of her way and marched into the room. Even if she was free to do as she pleased, she would still fight his allure, for she had no wish to be just one in a multitude of conquests.

Liam allowed her to hold fast to her silence for now. He had tasted her desire and seen that he could still make her laugh. One look at her face had told him that she was doing her best not to reveal her amusement over his little jest at the door. He had also seen how she had stiffened her spine and banished it.

As they ate and then gathered up their belongings, Liam made only a few attempts to stir her simmering anger into a rage. He could see it would not take much to accomplish that, and he did not wish to have the confrontation he sought here, in a tiny room in an alehouse, within earshot of a woman he had once bedded. Especially not within earshot of a woman like Mary, for he had no doubt she would repeat whatever she heard to anyone who would listen. As they continued on to Scarglas, he would have hours of privacy to goad Keira until she was too angry to keep silent.”

Want more steamy stories? Sign up for A Love So True's newsletter, and get our favorite romance books delivered straight to your inbox.