Enter for your chance to win the first book in the Clan Kendrick series!

Hungry for a new historical romance set in the Scottish Highlands? Look no further! Vanessa Kelly, author of The Improper Princesses and The Renegade Royals series, has penned a new story that follows the men of the Kendrick clan. First introduced in The Highlander's Princess Bride, which centered on Nicholas Kendrick—the Earl of Arnprior and eldest Kendrick brother, the first book in this new series follows Royal Kendrick—a hunky highlander who only has eyes for Lady Ainsley Matthews. On the run after she winds up pregnant by her vicious fiancé, Ainsley turns to the only person she can trust: Royal.

Though they didn't part on the best of the terms, the desire Royal and Ainsley once held for each other still simmers beneath the surface. And when Ainsley comes back into Royal's life, he's realizes he's unable to refuse the woman of his dreams. When she asks him to care for her infant daughter, he accepts—knowing he's about to embark on a new adventure. All is well until Ainsley comes back into their lives—wanting to be a real mother to the daughter she left behind. The only way they'll pull this off is by getting married. But will this marriage of convenience turn into one of passion and even...love?

Together with Kensington Books, A Love So True is giving away a copy of The Highlander Who Protected Me to five lucky winners.

By entering your email address, you agree to receive emails from A Love So True and Kensington Books. 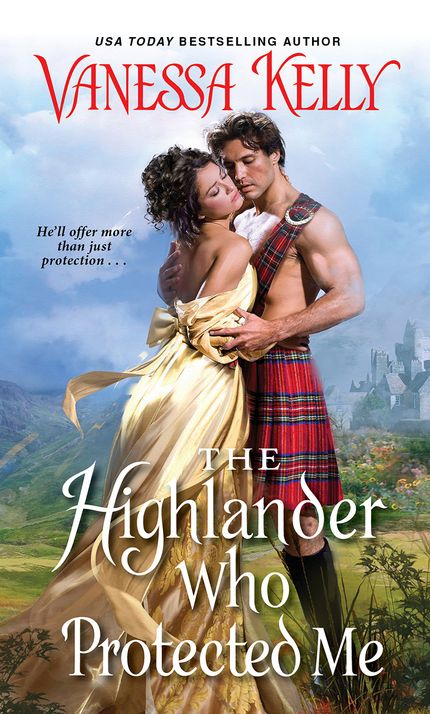 The Highlander Who Protected Me

Bestselling author Vanessa Kelly returns with an enthralling new series about the men of the Kendrick clan—and the women who claim their hearts . . .

Lady Ainsley Matthews, heiress and darling of the ton, was expected to make a magnificent match. Instead she’s hiding on a remote Scottish estate, terrified that her vicious former fiancé will use her pregnancy to force her into marriage. One man can help her—Royal Kendrick, son of a distinguished Highland clan. Though a mistake drove them apart long ago, Royal is the only person Ainsley trusts to protect her baby—even if that means agreeing to never see either of them again . . .

Scarred in body and soul by war, Royal suddenly has a purpose—caring for an innocent babe and thereby helping the woman he can’t stop loving. But when Ainsley ultimately returns to Scotland, determined to be a real mother to her child in spite of the risk, there’s only one solution: marriage. And only one likely outcome: surrendering to the desire that’s simmered between them for so long, no matter how dangerous it may be . . .

The Highlander Who Protected Me

Note: The sweepstakes is open to all legal residents of the 50 United States and Washington, DC who are 18 years of age and older by October 22, 2018.