EXCERPT: Marry Me by Sundown, by Johanna Lindsey

Marry Me by Sundown will leave you breathless…and in need of a sexy miner of your own.

Marry Me by Sundown 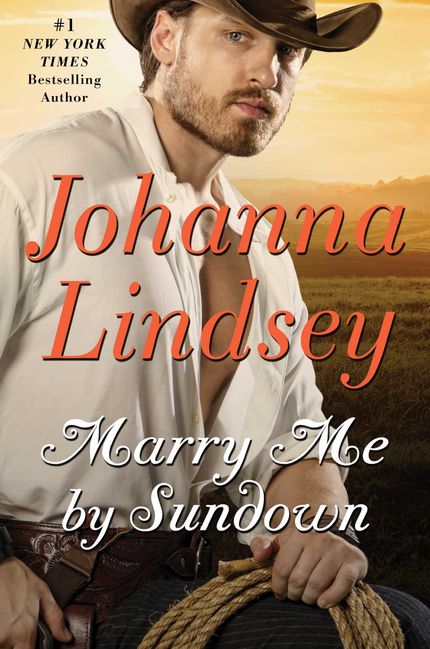 “ ’Bout time,” he said, and stepped behind her again.

She gasped softly the moment his arms came around her, but she knew he only did it to position her hands on the rifle and lift her arms to the appropriate height. “The butt of the rifle needs to be pressed against your shoulder or the recoil could knock you on your as—uh, backside and hurt like hell, so don’t fire unless the butt is firmly seated like this. Now, let’s see if you can hit something before the ammunition crate is empty. Try one of those cowbells on the fence.”

She would have huffed at his sarcasm if his chest wasn’t still pressed to her back, causing a flurry of agitation inside her.

“Did I need to mention you have to pull the trigger?”

More sarcasm, but he stepped back this time, letting her breathe normally again so she could point out, “Wild animals that can hurt me aren’t as small as that bell. At least give me a target the size of a small animal.”

He picked up the crate and moved to open the gate, continuing another twenty feet before putting the crate down. She followed and even closed the gate for him—and noticed that the rifle was already starting to feel a little heavy. Was he really going to make her carry it as she searched for the money?

Before she brought that up, she looked at the gun on his hip. She was surprised he wore it even when he was mining. “Wouldn’t a pistol be easier for me to handle?”

“Not if you want to hit what you’re aiming at,” he said, putting his hands on her shoulders and turning her around so he could help her position the rifle again. “The rifle you hold high so you can look down its barrel at your target. I have an extra Colt, but you shoot from your waist with that type of gun and hitting your target requires a lot more practice.”

He aimed the rifle for her, placed her left hand under the barrel to support it. Tipping her head and looking down the long length, she saw it was pointing at his trespassing sign. She was about to pull the trigger when she felt his breath against her ear. A delicious shiver ran down her spine, and she nearly dropped the weapon. She lowered it before it slipped out of her hands. She turned slowly as he stepped back, and only then realized that he’d merely been leaning close to see if her aim was accurate.

“Have you changed your mind about learning to shoot?” he asked.

“No, I—” Good grief, where had her bloody thoughts gone! “You just described how you shoot a Colt, but I’m a woman. Wouldn’t it be just as effective if I raised the pistol to the same height as the rifle and looked down the length of my arm?”

He stared at her a moment before chuckling. “You could be right. Wait here while I fetch it.”

What was it about Morgan Callahan that enabled him to make her nervous and breathlessly stirred up at the same time?

She set the rifle down and fanned her cheeks with both hands until she saw him heading back to her. Still shirtless. Still flaunting a physique that had to be the pinnacle of masculine beauty and temptation. Did he know what a fine figure of a man he was? Maybe he did and that’s why he hid an ugly face under that horribly shaggy beard, so it wouldn’t detract from his magnificent body—and she still wasn’t thinking clearly!

“I don’t have an extra gun belt for this,” he said as he reached her, “so you’ll have to figure out how you’re going to carry it.”

“Couldn’t I borrow yours?”

The weapon was nearly a foot in length, making it too long to fit in her purse or the pocket of her skirt, but she supposed she could tie it to her waist with a long ribbon. She would just have to make sure Morgan didn’t see her carrying the gun that way. She caused him enough amusement as it was. But when he put the weapon in her hand, she realized that it was so light compared to the rifle, she could probably just carry it in her hand.

“You never know,” he said as he showed her how to load the Colt by demonstrating with his own. “Encounters with people in these hills are rare, but in addition to claim jumpers, I’ve heard of outlaws out this way and seen the marshals and bounty hunters searching for them. There are also other prospectors traveling through these hills. The greatest danger to you will come from wild animals, but you still need to be able to protect yourself from any strangers you come across.”

She was more concerned about wild animals. “What about bears? Do they come up here?”

“Ran across one fishing at the river below here last year. Made a coat out of him. But haven’t seen any this far up. Now, let’s see if your idea has merit. Shoot the sign.”

She lifted the gun, looked down the length of her arm, and pulled the trigger. The weapon seemed to jump in her hand, pointing upward as if it had a mind of its own. Texas yelled from the cliff, “I’m trying to sleep up here!” And Morgan started laughing.

But then he was standing behind her again, his chest pressed to her back, and he rasped by her ear, “You forgot the support.” He raised her left hand and placed it under her forearm. “Grip firmly the way you did with the rifle barrel to hold your arm steady. Try now.”

His breath crossed her cheek this time. He was doing it again, trying to see for himself if her aim was accurate. Did he really think she could concentrate when it felt like she was utterly surrounded by him and all she could think about was kissing him?

“What are you waiting for?” he asked.

She lowered the gun, pointing it at the ground, and turned about in his arms. He’d already straightened, so she had to glance up to meet his eyes. She was going to make it clear that he was far too distracting for this to work and suggest that his friend teach her instead. The words didn’t happen.

The kiss began softly. As she’d guessed, his mustache tickled her upper lip, and she couldn’t help the giggle that started, but it was cut off almost instantly when his hand at the back of her neck pressed her closer to him and his lips spread hers apart, or her gasp did; in either case, the kiss was now deep and amazing and so very stirring, with so many wonderful sensations showing up all at once. There was a fluttering in her belly, her pulse racing, a tingling up her back, and a shocking urge to put her arms around him when his tongue slid next to hers.

She moaned in delight. Unfortunately, he didn’t recognize it as a sound of pleasure and stepped back. And for once, she could tell that he was frowning. But for once, she didn’t want him to.

He cut in, “Necessary to clear your head. You were getting distracted. Now, concentrate and keep practicing. I’ll check on your progress in a few hours.” He walked away, but tossed back, “And no cheating by getting closer to the sign.”

She would have admitted the kiss was nice, but maybe it was better that she didn’t let him know that she’d liked it quite so much. That might bring him back for more when she supposed they ought not to be doing that, considering they didn’t even like each other. But without the insult preceding it this time, she couldn’t deny being kissed by the bear had been thrilling.

Feeling a bit full of herself because of it, she raised the weapon she was still holding, supported her arm, and fired off several shots. She stared incredulously at the sign she’d just damaged, then yelled to Morgan before he disappeared inside his mine, “I’ve mastered this!”

“The hell you have.”

“Three shots, three holes in the sign. It would appear shooting is my forte.”

He snorted and continued on, yelling back, “Return before dinner or you go without.”

She wasn’t displeased with his sour reaction. She smiled, guessing that his anger wasn’t directed at her. He was mad at himself because he’d wanted to kiss her, and he had.

Want to keep reading? Download Marry Me by Sundown now.