Passion, Secrets, and Lies Collide in Be Mine

What price is Sherry willing to pay to live out her wildest fantasies?

Sherry has a secret admirer.

When she becomes the recipient of a series of light-hearted love letters, she guesses it must be one of her students playing a prank. As a wife, mother, and dedicated English teacher, she lives a routine, mundane life. Slowly, the letters become more explicit, and Sherry can’t ignore them any longer. Then she learns the identity of the secret admirer, and is stunned, but curious.

Her husband, Jon, is amused by the letters. Late one night, Jon tells Sherry what he thinks she should do. It’s not what she expected. And if she takes this leap of passion, how far might she fall?

In this elegantly written novel, Laura Kasischke tells a story of suspense and romance, filled with undeniable passion and intrigue. It explores the deepest desires we have as humans, and the repercussions of trying to fulfill them.

Read on for a steamy excerpt from Be Mine, and then download the book. 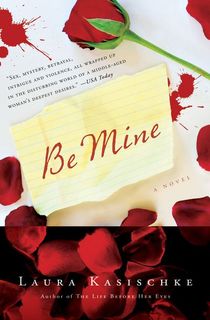 A hangover this morning. And, from sex, the exertion of it, my stomach muscles ache. I’m sore between my legs. A stinging burn just under the skin of my inner thighs. All these familiar, nearly forgotten, vague pains of passion.

“I want you to find out who this secret admirer is,” Jon said last night, turning me over, looking into my face as he entered me, “and fuck him.”

“I want you to let him do anything he wants to you,” he said.

“I want you to fuck another man.”

Jon’s eyes were narrowed, and the look on his face was more intense than any expression I’d seen there for years. My heart sped up, seeing it, as if I’d caught a glimpse of an animal at the zoo, outside its cage, or a man sauntering into the bank with a gun. Anything could happen here, now, I thought, and I was as excited as I was afraid to find myself in this ordinary place suddenly lit up with so much extraordinary potential.

“Do you understand?” he asked, putting his hands on my shoulders, his face on my neck, slamming into me.

Want more steamy reads? Sign up for A Love So True's newsletter, and get our most romantic stories delivered straight to your inbox.

Yes, I said, arching my back to meet him.

It wasn’t until after we were done, after I’d gone downstairs, called Chad, hung up the phone, and gone back upstairs to find Jon out of the shower and already asleep, naked, on his back in our bed, that I wondered how serious he had been—or, if he was serious at all.

That expression on his face—it had seemed serious.

But that was sex.

That was the moment, that was the fantasy. Surely, he wasn’t serious. We’d never even come close, in the past, to acting out any of our fantasies—even when we were young, and childless, and only marginally employed, with so much less to lose, and so much more time on our hands. And that one time—with Ferris—when it had seemed that I might stray, Jon had reacted, in the end, with anything but pleasure. Those many years ago, when I’d told him about Ferris’s profession of love, and the kiss (how innocent now, it seemed, that furtive parking lot kiss) and my own confusion, before Jon’s tearful pleading (You can’t ruin our family, Sherry. You can’t do it, to me, to Chad. Please, tell me you won’t do it, that you’ll just turn around now and come back), he’d been furious. He’d picked up a bedside lamp and, holding it by the neck, had shaken it at me.

What was my body made of, anyway, after all, I thought then, but so much tissue, and blood? I would rip open, like a pillow. I would crack to pieces, like an egg—and, still, stubbornly, absurdly, I was thinking about Ferris, the pencil behind his ear, pushing an overhead projector through the hallway, looking tired and intelligent and overwarm in his button-down shirt, telling me he was in love, for the first time in his life, and too late (two kids, a pregnant wife) with me.

Go ahead and kill me, I’d thought, looking at Jon with the lamp in his hand over me, raging.

But he put it back down on the nightstand and walked away.

My husband did not really want me to fuck another man.

Want more steamy reads? Sign up for A Love So True's newsletter, and get our most romantic stories delivered straight to your inbox.

Even if he thought he did, holding my shoulders as he said it—I want you to fuck another man—he was wrong.

Surely, if my secret admirer revealed himself, Jon would feel jealous, threatened. The titillation was in the possibility, not the act itself, I felt sure.

And what about me?

Had I ever really wanted a lover?

Until now, no. I was sure of that. Not even Ferris. I could still remember the relief that washed over me along with the fluorescent light when he told me in a corner of my classroom after the students were gone that he’d taken a job in Missouri, the way my whole life seemed opened up to the possibility then of being the woman I’d wanted to be—the farmhouse, the child, the car that started on the first try—forever.

But Chad had been a toddler then. I was so much younger. Now, I’d already been that woman. Now, I was free to be someone else if I wanted to be. Now, did I want a lover?

In the dark, beside Jon, in our bed, I thought about that for a long time, without any idea of what the answer would be. Trying to look for the answer to that question in my own mind was like finding myself suddenly inside an echoing tunnel:

I couldn’t even decide on a question long enough to decide on an answer.